“The band consisted of my little sixteen year old bother Kevin on drums, ‘X’ on guitar & backing vocals, the inimitable Yanis Zakis on vocals and myself on bass and backing vocals”
David J, http://www.davidjonline.com

Vince Venom : That is the punk name that Dave christened me with when I joined the band!
Janis Zakis

“In the late 70s he founded ALVA the first Latvian rock band in the UK but after disagreements amongst the band members came back home to his mother in Corby. Zakis then formed another unsuccessful band called Rock Blue until he went to college in Northampton and teamed up with the now legendary brothers, Dave and Kevin Haskins. Shaving his hair and then setting fire to the stubble Zakis launched his career as Northampton’s first real punk star. After a rapid rise and fall Zakis parted company with the Haskin brothers only to see them re – form as Bauhaus. Zakis took many years to get over the shock of having been so close to his first real brush with fame and success.”
Janis Zakis’ now disfunct website

That was another punk band and the other members were my brother David and Dave Exton. We only played a few shows and were bottled off the stage in one of them! I recall that we did a great version of “Downtown” made famous by Patula Clarke. Another song title that comes to mind is “9 to 5”.
Kevin Haskins 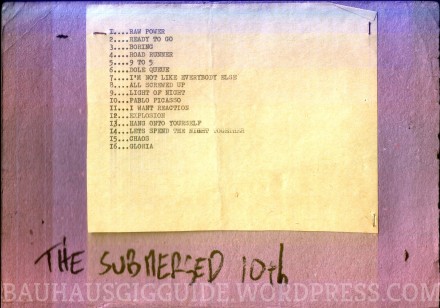 The covers we played were:
Raw Power – Iggy Pop
Road Runner – Jonathan Richman
Let’s spend the night together – Stones
Gloria – Van Morrison
Pablo Picasso – Jonathan Richman
Hang onto yourself – David Bowie
I’m not like anybody else – The Kinks
Down Town – as sung by Petula Clarke!

Compilation CDs (NOT FOR SALE)