„Another Suburban Romance – that was a play co-written by Alan Moore and Andrew James (Old Gangsters Never Die came from this play).
Glyn Bush

Regarding Alan Moore: Storyteller book, the original Old Gangsters Never Die monologue was written a bit earlier for Northampton Art Labs performances but later incorporated to the play.
Alan brought it into the Emperors and later The Sinister Ducks. The Ducks version has been recorded at the Beck Studios in 1983 and appeared on the B-side of The March of The Sinister Ducks 7” single. Remastered version released on the second bonus CD of David J – Etiquette of Violance 2013 reissue.
Alternate 10 minutes long version has been recorded by the second incarnation of The Emperors of Ice Cream around the ’90s and also appeared in their live set.
First comic adaptation appeared on the cover of The Sinister Ducks single, later reprinted in The Mammoth Book of Best Crime Comics (Robinson, 2008). Second comic version appeared in Alan Moore’s Another Suburban Romance (Avatar Press, May 2003)

I wrote some music for the play along with my friend Pickle (PK) and we performed a song called the Whore’s Poem at the Racehorse.  I can’t remember if Alan was involved, he may have been in the audience. The play was never finished or performed anyway. The music was pretty crazy and tricky to play, very prog/Zappa ish.
It was largely instrumental apart from the Whores poem. Alan left us to our own devices.
Glyn Bush

‘Another Suburban Romance’ was an early Alan Moore/Andrew James collaboration. Written in play form, Glyn and I wrote and recorded the incidental music. Each Character had a signature tune. Hence the Whore’ Poem.
Pickle (Mr. Licquorice) 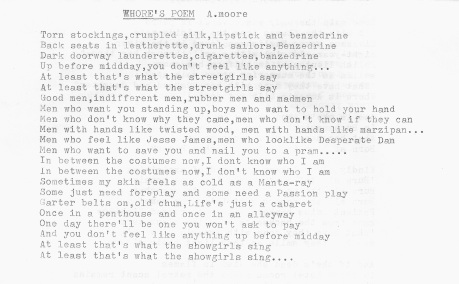 Guitar demos have been recorded for Another Suburban Romance play including Whore’s Poem. The song also appeared in the live set of The Mystery Guests around ’81. Audience recording of their Warwick University gig exists. 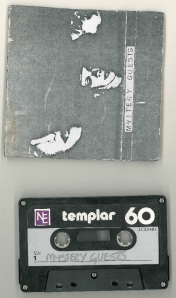 Short piece of Another Suburban Romance horns intro was podcasted as part of The Dandy Hour Episode 8. It can be heard in the background from 10:55 to 11:27.

That was re-recorded recently from the original score. We had an idea to do it as a Dandelion Set track but it didn’t work out.  The recording was never finished ..no bass drums organ etc and what there was …. just horns is not even mixed.
Pickle (Mr. Licquorice)

At least two versions have been recorded by The Satanic Nurses and The Emperors of Ice Cream later in the ’90s, although they have nothing to do with the original music written by Pickle and Glyn Bush.

I actually went to school with Alex as a teenager and used to free-jam with him sometimes. He was the first person to introduce Frank Zappa to me, (“Weasels ripped my flesh” I think,) so I thank him for that! Alan tried to sing the basic tune that they had cobbled together for “Suburban Romance”, musically initiated by a another Emperors Member and musical polymath who was known as “Pickle” […] It was all very hazy, so I took the lyrics away and composed a brand new tune & arrangement for it..something rather Brechtian in it’s flavour. Pickle went on to form a quirky Art-punk band called the “Mystery Guests” that Alan occasionally provided words for..(“Wurlitzer Junction” for example.)
Tim Perkins

Judy Switched Off the TV

It was mentioned in Alan Moore : Storyteller book and at Glycon website. Comic strip adaptation appeared in Alan Moore’s Another Suburban Romance (Avatar Press, May 2003).

This site uses Akismet to reduce spam. Learn how your comment data is processed.

Compilation CDs (NOT FOR SALE)